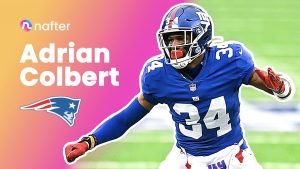 Adrian Colbert, former player for the New York Giants, has recently signed on as a professional football safety for the New England Patriots of the NFL.

Adrian Colbert of the New England Patriots has begun creating content NFT’s with the Nafter Ambassador team as a first major professional athlete on the platform. The partnership between Nafter & Colbert highlights the potential use case for Non Fungible Tokens in the professional sports arena.

“I’m really hype to begin minting content for my fans. I believe NFT’s will become our new era’s trading cards, in-that people will collect and trade minted moments from professional athletes from all sports leagues”.

When he’s not tackling his opponents on the field, Colbert enjoys golfing with friends and is also an avid gamer, streaming on Twitch weekly.

You can learn more about Nafter’s collaboration with Colbert on the official Adrian Colbert Joins Nafter Ambassador Program video shown above.

Nafter is a NFT Marketplace made for creators and fans to give them an opportunity to interact.

The main goal for Nafter is to build a strong community of early adopters and supporters of the Nafter App in order to build the greatest product for creators and their fans ever. We are waiting for YOU in our Nafter Family!