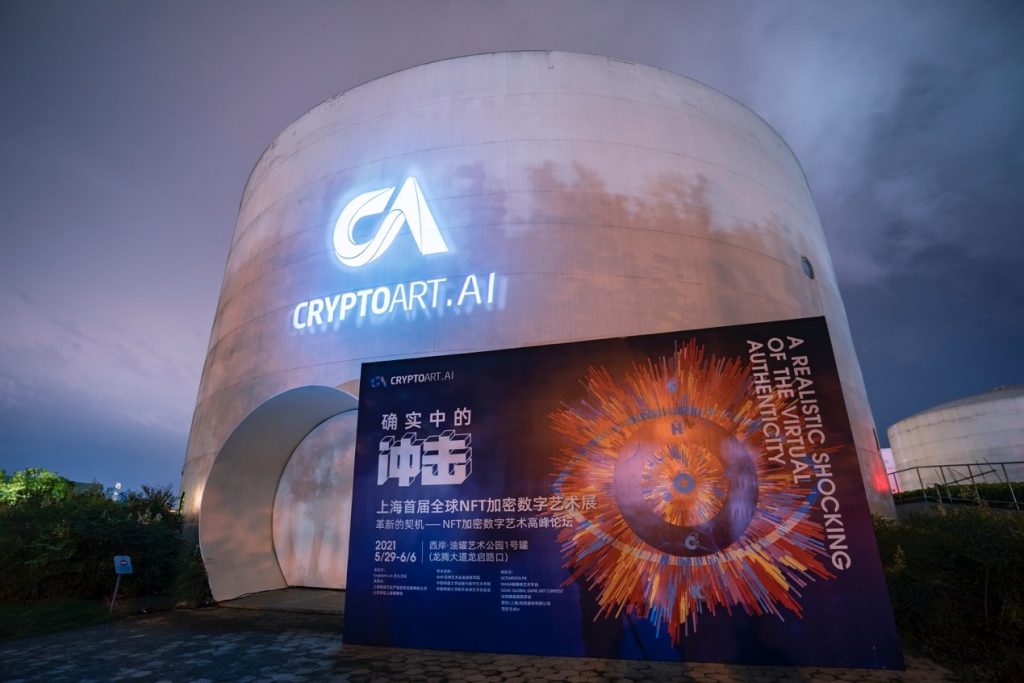 Feng Han – “When Nothing surfaces in signs, when Nothingness emerges at the very heart of the sign system, that is the fundamental event of art. The poetic operation is to make Nothingness rises from the power of signs – not banality or indifference towards reality but radical illusion.” —- The Conspiracy of Art, 1996, Jean Baudrillard

Singapore–(June 10, 2021) – On May 29th, 2021, CryptoArt.Ai hosted the first global scale NFT crypto art exhibition in Shanghai. It caused a stunning effect on its opening day as NFT broke into the mainstream amidst the controversy and discussion earlier in the year. Due to the COVID-19 pandemic, there hasn’t been a holistic and art history-based digital art exhibition globally.

The exhibition has also made several ‘first’ and records in history with 27 artists/groups and their almost 100 pieces of works. The quality of the exhibition and experience maintained clear logic and level. The auction record holder of digital art Beeple also presented his artwork The First 5000 Days on a massive 16 metre screen. Other renowned artists including Pak, mbsjq, Ouchhh and multiple emerging Chinese artists have brought their excellent and rewarded works.

When it extended its significance to the art world, it reflected as how human make influence on apparatus, or vice versa, including the interaction between human and machine and the artworks that generated/created by it. With this theory and application of contemporary technology (computer tech), people could trace back the earliest experiment on digital art, such as Laposky’s oscillogram to CGI, and then as the internet emerged, people witnessed the internet art/post-internet art, and cryptoart based on blockchain technologies. 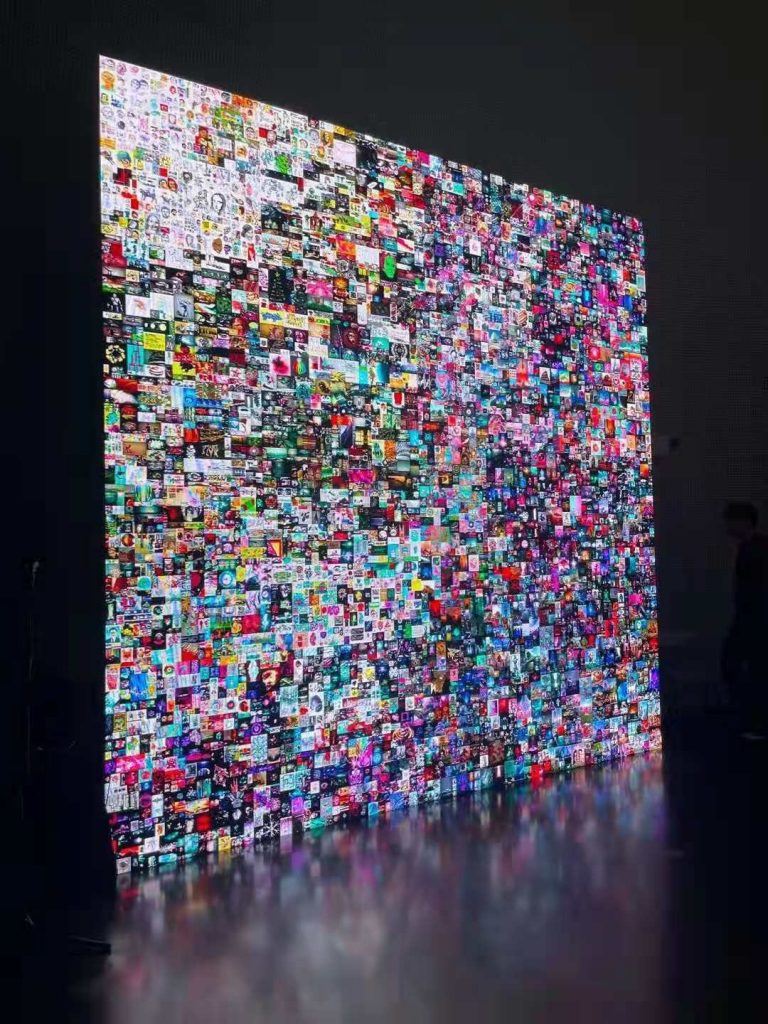 The exhibition has achieved what it was intended to both on the width and depth. Besides the ‘flashy’ visual experience are in-depth brief history of digital art to introduce the context for the audience. To a certain extent, The Realistic Shocking was a milestone in digital art history.

More than seven decades of history has been condensed in one show. When people are experiencing something shocking and happening, the existence and position as ‘insiders’ usually blinded people, so that people can’t realise the shocking effect. Especially for the ‘gatekeeper’ in the artworld, maintaining the old order and monopoly system is the ‘best choice’.

Curator Du Xiyun compared the shock with Robert Hugh’s book/documentary The Shock of the New. Since the beginning of impressionism, the modern/contemporary art has always been challenging the old aesthetics and discourse, people are still living inside of the aftershock. Cryptoart has an equivalent shocking value as well. It did not only shock the art medium, but most importantly, the way of art dealing and the understanding the ‘authenticity’. When artworks could be duplicated easily, how do people define the authenticity of it? The nature of blockchain technology coincide with artwork’s ‘uniqueness’ and ‘authenticity’, which in a sense, is a decent way to protect artists’ rights.

Cryptoart is not only about making shocking record in auctions, but also about the shockwave that it created in the whole artworld. The shock and reform on aesthetics and styles has just begun. In another word, cryptoart even though mostly innovative on the ‘crypto’ part now, which is the uniqueness and authenticity based on blockchain tech, but the influence will eventually impact more on the ‘art’ part of it. For the indigenous residents on the internet, they are the generation that use digital medium to create art, but with the new driven factor and momentum, digital artists will naturally push the boundaries of creativity.

In the exhibition A Realistic Shocking of the Virtual Authenticity, people could notice the growing vividity of how capable the digital art can become. When the images created by virtual space is becoming more and more ‘real’ and vibrant, when their authenticity has been transferred to the cyberspace, when the ubiquity of daily life is being transferred into the ‘online community’, people might feel a bit of anxious and worried, but more likely, they dive into the sensual realm and befuddled in the stimulations.

Speaking of the mimic or the simulation of the reality, people have to mention Baudrillard’s most popular book Simulacra and Simulation (1994), not only has it been paid huge tribute by the movie The Matrix, but also introduced a rather important concept – simulacra. In the third-order of simulacra, the simulated is more real than the real, and as a result, the real is at the mercy of the simulated, not the other way around. 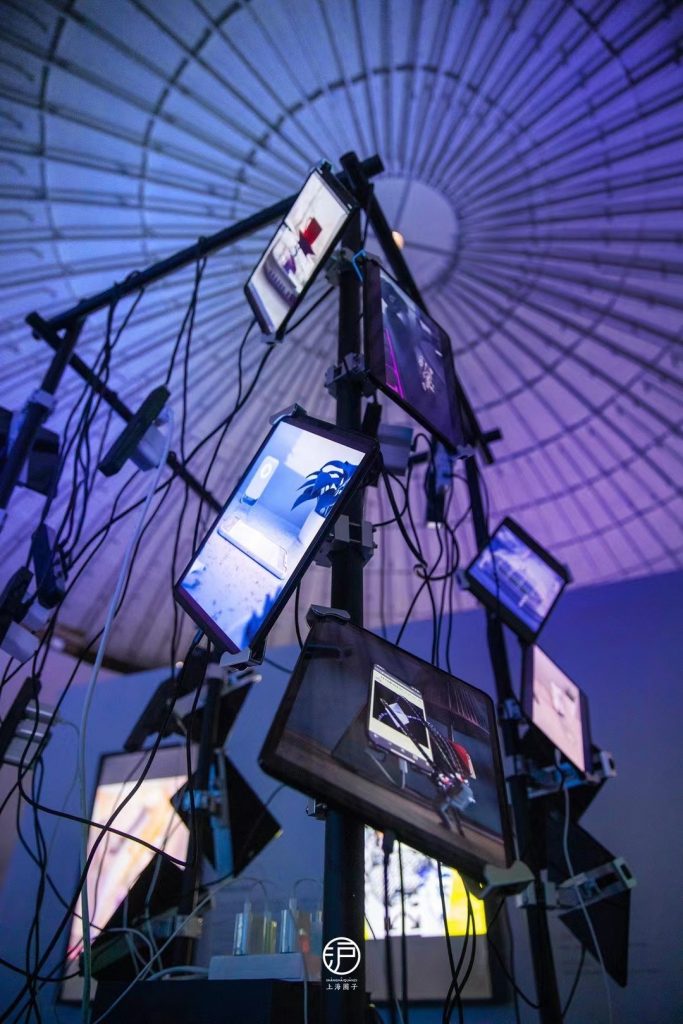 In order to elaborate this concept, Baudrillard introduced the fiction On Exactitude in Science (1946) written by Jorges Luis Borges, where in the novel, there is a kingdom whose King is obsessed with making a detailed map of the territory. As the details getting more realistic to the real land, the cartologist eventually completed a map as big as the land. Then as time passes, their offspring were not interested in cartology anymore, then they discarded the map in a deserted land. As the map got decomposed and corrupted in the desert, the kingdom vanished as well.

People are now making a detail-oriented map of the universe. It’s more detailed than the real.

NASA Data Gate by Ouchhh delivered a similar concept. By collaborating with NASA, the art collective Ouchhh obtained a massive amount of cosmological data which collected by NASA. The Kepler telescope has travelled in the universe for 9.6 years, discovered 2,662 planets, recorded 61 supernovas, observed 530,506 stars. Among these data, there was an exciting exoplanet, which was discovered in 2015, the famous Kepler-452b that orbits 1402 light years away. It acts like a mirrored planet to the Earth.

When Ouchhh reorganise and reconfigured the data and applied artificial intelligence to run it, they achieved this artwork. Visually, they are dynamic lines and images animated in a cube, a familiar visual language to human, but the essence under it are objective solid data based on observation. The ‘translation’ is realised by machine learning, and presented a simulated universe trapped inside of a cube. “Can one person fit in the whole universe in a simple cube?” was the question that Ouchhh asked. Kepler’s data is continuously being updated, so will one day, the collected data of the observable universe fit into the cube? In the symbol/sign of universe, what kind of message did the artist collective want to deliver?

In another section, Jonathan Nash engaged deeper into the simulacra concept by presenting his work with iPad screens assembled in a scaffolding-like structure. On the iPad screens are his phone screen works, and on the phone screens are the collision of the virtual world and the (simulated) real world. Smart phones have already become the port into the virtual, and to a certain extent, it has already become the most common method to access the world. People don’t need to remember the historical names, events, or facts, nor do they have to remember any definition or knowledge, because they have stored knowledge in the cloud via the access of smart phones. As long as people could active the screen and type the keywords, they will navigate and locate the needed information.

Smart phones are catalysing the process of data transfer and digitalisation, and at the same time, the phone screens are destined to be the perfect metaphor of gate/port into the virtual. If there has to be only one device to represent the third-order of simulacra, smart phone must be it. Nash is romanticising the functions of phones, where people could see an astronaut skiing on the surface of screen, or the 3D urban-like circuit board right under the transparent screen… The phone completed certain human desires, backed up the date, uploaded to the cloud. People summited their identity and privacy to it, thus, they immigrated digitally to it. 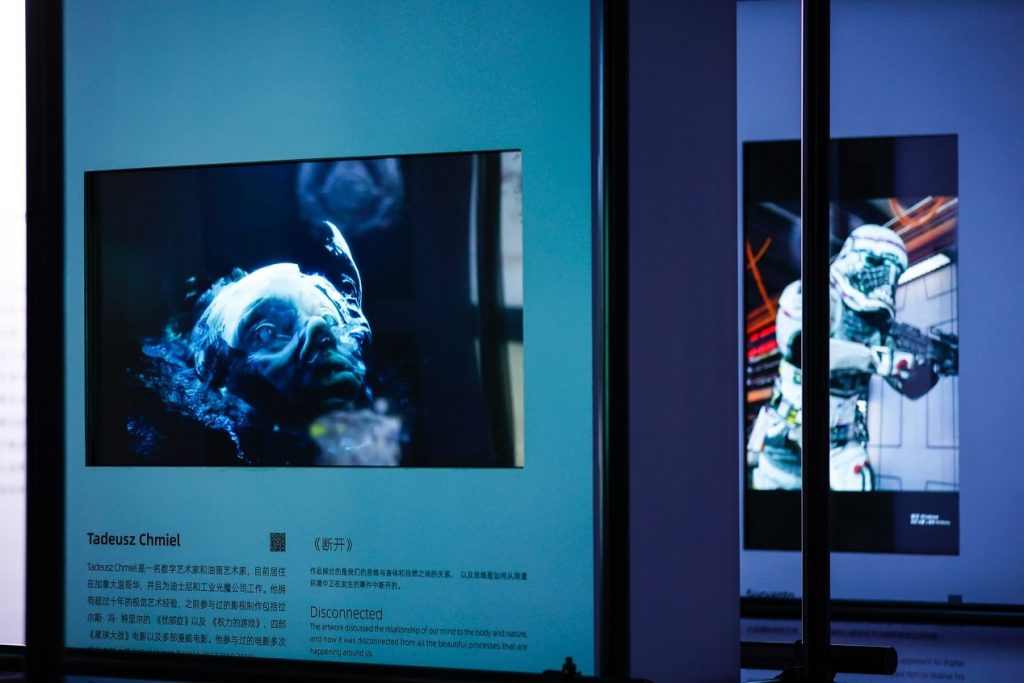 This is how people are eventually living in the third-order of simulacra, when the value of simulated sign/symbol is greater than the value of itself. And living in it means that people don’t consume the real products anymore, but rather to consume the symbol of it. On this level, it also coincides with René Girard’s theory on the ‘mimetic desire’, in which he stated that people’s desires are coming from mimicking the others’. People’s admiration, desire to possess are based on other people’s desires. Hence, an object is sublimed (or downgraded) to simplified symbol.

With the inspirations from these two thinkers, people are merely consuming what others consuming, people want what others want, and people realise that the value of the symbol is exceeding the value of the product itself. People are swimming in the ocean of symbols. People keep on consuming the symbols in the mimicked desires, until they fully dwell in the third-order of simulacra.

In the world constructed by the third-order and late capitalism, people are merely the biotic batteries lying in the sheer slime, generating powers to the monster machine, at the mercy of it. The simulation that offered by the monster machine is flashy, hyperreal, and satisfies them, numb them, and also push them competitive.

In this open-end future, should people try to conserve or abandon ‘the real’? Shall people embrace this future or start to concern? Different artists offered their different approaches. Marc O Matic’s video work Yesterbeast depicted a post-apocalyptic scene. When the AI is ‘woke’ and filled with curiosity, then started to dig into the forgotten history in the ruins and tried to rebuild its ‘creator’, for the long-gone creator, what is the robot’s purpose? Could the consistent robot with a clear and determined purpose be human’s narcissism? Is religious enthusiasm involved in it? Even though the imagined future could be negative, people still project humans’ narcissism onto it. Perhaps this complex is originated similarly with human’s fear of death, as people are obsessed with the life afterward (heaven or hell) to make them feel better. This escapism on the other hand is accelerating the transition to the simulacra.

In Aimo Yang’s digital performance Consciousness Anti-body 2021, he used 6 HD projectors to project synchronised images onto the dome in Tank No.1 space. A religious visual language, as people have to look up above to appreciate the paintings inside a cathedral. The action of ‘looking up’ and the overwhelming sensation offered an a priori experience.

By employing this language, Yang used live-generated images to provide the audience a long-gone sublime. Underneath the dome are improv dancing and jazz music jam session. These 3 types of performances intertwined and tangled together, evolving and looping a dance between the real and the simulated. Just like the archangels soaring into the heaven, the dancers are metaphorically leaping into the computer binary universe, continue living as digital avatars.

When one digital artwork has been converted to NFT, its value of exchange has been generated by using crypto technology, but its use value is almost annihilated in the physical world. The annihilation is devouring the authenticity, physicality, real-life production, modernity, and instinct. People’s organism bodies are still living in the real world, but in the society consists of ‘bodies’, everything turned into simulacra.