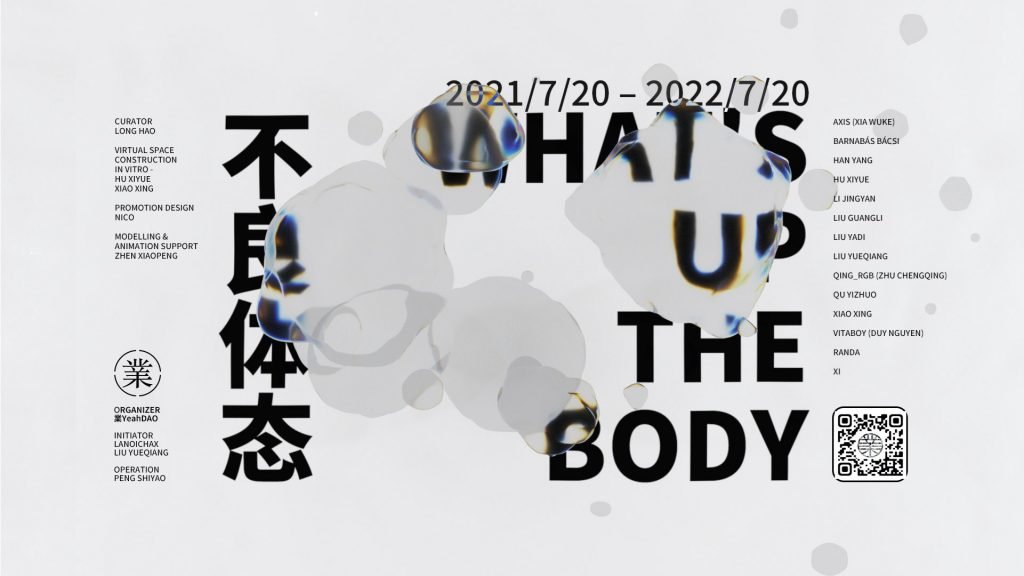 Shanghai, China–(July 16, 2021) – Launched by YeahDAO (NFT Art Label), the exhibition Bu Liang Ti Tai | What’s Up the Body is presented in collaboration with 14 emerging artists from Europe, North America, Asia, and other regions. Available online from 20th July 2021, to 20th July 2022. It features 14 pieces/groups of NFT artworks, of which 6 pieces/groups are exclusive premieres.

As the beginning of YeahDAO’s long-term exploration of the limits between NFT and art, the exhibition brings together the cross perspectives of culture, art and blockchain industries, along with crypto-ism and DAO-oriented production as one of the ideal realization tools and possibilities of ‘A Body without Organs’. To reconceptualize fixed forms and hierarchical organizations in terms of fluidity; to rethink homogeneous structures in terms of heterogeneity; to rethink universal, default, homogenized experiences in the lens of marginality; and to re-envision social, economic, and geopolitical virtual lines and appropriations in the light of connectivity.

What’s Up the Body, opens with an ongoing quest to engage with the dynamics of the ‘body’ via an idiomatic phrase, in the hope that pondering the body can illuminate everyday life. It also emphasizes the exhibition as an event, rethinking fixed, structured solid textures in terms of becoming an event, by looking at an extraordinary space in between the opposites.

The Chinese title, Bu Liang Ti Tai, which directly translates as the ‘Unhealthy Body’, on the other hand, covers the partially unregulated state of blockchain technology. A state that is considered unhealthy and needs to be disciplined and corrected. DAO (Decentralised Autonomous Organisation) as an alternative to the organic and inorganic, material and immaterial bodies of the human body, organizations, assemblages, etc., branches out into heterogeneous viability by creating new groups to territorialize and de-territorialize at fixed, habitual abstract connections between human and social. In place of the binary division between healthy and unhealthy, the direction of ‘correction’ is blurred. Thus, an unhealthy body is not a state that needs to be corrected.

“As a way to define and prove ‘matter’ in the metaverse, NFT is another milestone in our progress towards a gamified and digitalised society in the context of human beings’ emergence and addiction to consumerism, entertainment supremacy and mass anxiety. In addition, thinking virtual, applying virtual and creating virtual in the metaverse become another field of artistic creation.

We try to regard NFT as the boundary of the interaction between artistic entities and digital realm, and will continue to explore and experiment it with the YeahDAO Join-Exhibition I as a starting point,” said Lanoichax, initiator of YeahDAO.