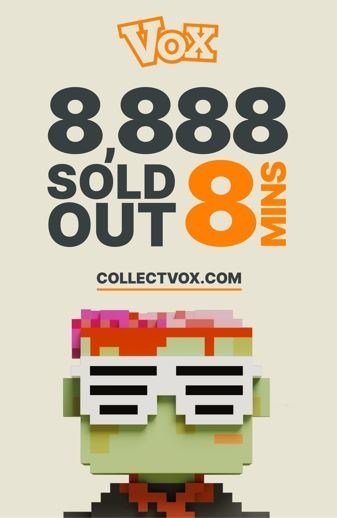 PALO ALTO, Calif., Aug. 11, 2021 — Gala Labs is excited to announce that the inaugural series of VOX, collectible, one-of-a-kind ERC721s, the standard in non-fungible tokens (NFTs), that are 3D, animatable and with future utility have sold out in under 10 minutes.

Each of the 8,888 inaugural series of VOX have been inspired by the characters in Gala Games’ Town Star and will also have a unique set of traits specific to its character, look and job. To allow for an equal buying environment and to create an element of surprise, each VOX purchase was verifiably randomised, which means a buyer didn’t discover which character they bought before the buy or the rarity of their VOX until it had been released on Rarity Tools. Each VOX was sold for 0.0888ETH, plus the gas fees.

Once purchased, the owner received the FBX file, which allows them to bring their VOX to life through animation, augmented reality applications or through 3D printing. What makes VOX different from other NFTs available in the marketplace is that in the future through Gala Labs’ relationship with Gala Games, the premier blockchain gaming company, the VOX will be able to connect to the Gala Games metaverse and earn, through play, VOXcoin for their owner.

Chief Strategy Officer of Gala Games who oversees Gala Labs, James Olden, shared, “Selling out a limited series of this magnitude in less than 10 minutes demonstrates that NFTs aren’t going anywhere. In fact, Gala Labs is taking them into the future with the utility in the Gala metaverse and the marketplace has responded positively to that, given that the secondary marketplace is already facilitating sales higher than 10x the original price. We are excited to build on this success and have so much more just around the corner.”

Gala Labs will be issuing other series in the future and invite collectors to follow their work at www.CollectVOX.com

Gala Labs is a group of creative technologists from around the globe who enjoy exploring, stretching and bringing to life ideas that complement the ecosystem built by Gala Games. We are motivated to find new and exciting ways to creatively use technology like smart contracts, to engage the fans of Gala Games and our partners. The inaugural project launched by Gala Labs is known as VOX, which are collectible NFT ERC-721 tokens that are revolutionizing avatars from 2D pixelated images to 3D voxelated animatable characters. The first series is inspired by Gala Games’ game Town Star.

Launched in 2019 and powered by the world’s largest independent node network, Gala Games has been built to give power to the gaming community. As the first blockchain gaming platform, Gala Games has created an ecosystem where players and creators may be rewarded for their participation.

Founded by Eric Schiermeyer, the co-founder of Zynga, and operated by a global and diverse group of gamers, engineers, art enthusiasts, and geek-culture aficionados with teams in the United States, Canada, the United Kingdom, South Korea and the Philippines.