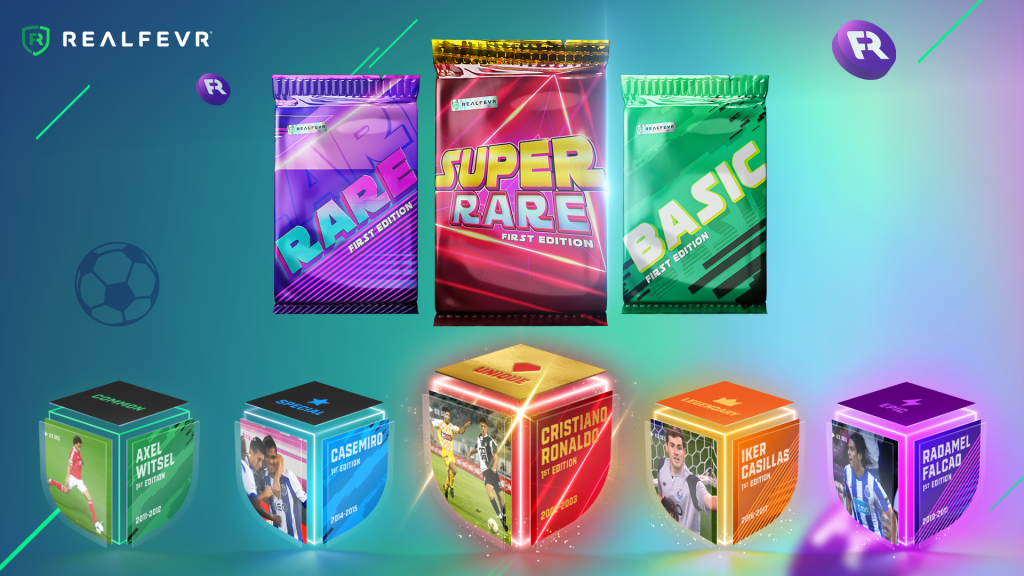 LISBON, Portugal, July 27, 2021 — RealFevr, a Portuguese startup specializing in fantasy football and boasting over 1.2 million registered users, has launched a marketplace of official football NFTs. The technology company is presenting fans with the possibility of collecting videos of the most memorable moments of global stars like Cristiano Ronaldo, Bruno Fernandes, Angel Di Maria, James Rodriguez and many others.

The officially licensed football video collectibles will soon be available at www.realfevr.com for those who want to purchase one of the three packs available: Basic, Rare and Super Rare.

Inside the packs, there are collectibles from five different classes, which vary depending on their rarity: Common, Special, Epic, Legendary and Unique – for the latter, as the name implies, only one will be launched.

RealFevr’s “Season Premiere” of the NFTs will be divided by several pack drops. In one of them, it will be possible to collect the Unique of Manchester United and Portugal midfielder Bruno Fernandes. In a subsequent drop, fans can acquire Cristiano Ronaldo’s first ever official goal.

Bruno Fernandes, the ambassador for RealFevr’s NFT launch said, “Engagement with fans is really important for me and that is why I am supporting this RealFevr NFT launch. Some of my best goals scored for Sporting are part of the marketplace and I hope my fans around the world will be excited by the prospect of owning them.”

There many memorable moments that will feature in this series of drops from players like Iker Casillas, Rúben Dias, Raul Jimenez, Diogo Jota, Di María, among others.

“From the beginning, our approach was to seek to deliver an immersive experience for fans,” said Fred Antunes, CEO of RealFevr, highlights. “If we look at the data from cryptoslam.io, the sports NFTs market represented in the last months a turnover in the order of 700 million dollars. Our strategy is not only to capture a part of this market, but to ensure that more people discover it”.

RealFevr’s NFTs were created using Binance Smart Chain’s blockchain, for its simplicity of use and easy integration with other protocols.