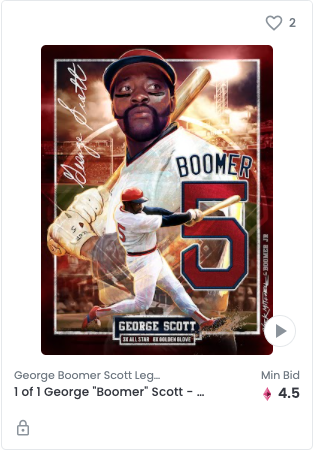 AUSTIN, Texas, Sept. 13, 2021 — Photo File, INC. announces the inaugural release of Officially Licensed NFTs (Non-Fungible Tokens) of former Major League Baseball players. The release is the first in a series, combining the efforts of a world-renowned artist and the son of a Major League Baseball legend. NFTs are digital collectibles purchased with the Ethereum cryptocurrency. Once purchased, the NFTs may be traded or sold to others, with ownership permanently recorded on the blockchain. The NFTs were made available on the Opensea.io platform starting Friday, September 10.

Each Limited Edition series will feature varying compositions of each player, including animation and sound. Pricing starts at under $100 USD and each player will have four editions: 1-of-1, 1-of-10, 1-of-100 and 1-of-1000. The Ken Griffey, Jr. series will also include a 1-of-24 edition. The winning bidder on each 1-of-1 edition will receive a physical video frame that plays the animation on a constant loop and can be displayed like any other collectible.

The artist, Clark Mitchell, has created works for iconic brands, including Star Wars, Disney, Lucas Arts, Coca-Cola, Time Magazine and ESPN Magazine – to name a few. “When I got the call to do this project, I was immediately on-board,” said Mitchell, “Working with the son of baseball royalty and an established brand like Photo File has been an amazing opportunity!”

George Scott III is the son of Boston Red Sox legend George “Boomer” Scott, who played 14 seasons in Major-League Baseball. “My father was my world,” said the younger Scott, “if you were a Red Sox fan back in the day, you knew Boomer was an integral part of the team. I’m so proud to work with Clark and Photo File to release these limited-edition collectibles.”

“The Photo File brand has been synonymous with sports imagery since its founding in 1987,” said Don McCann, President of the Company. “Historically, Photo File has enjoyed success selling photographic prints, frames and canvas. In the 21st Century, NFTs are the next logical platform for our content.”

Photo File owns a library of more than two million sports images and is a subsidiary of Globe Entertainment and Media Corp. (https://globecorp.co).