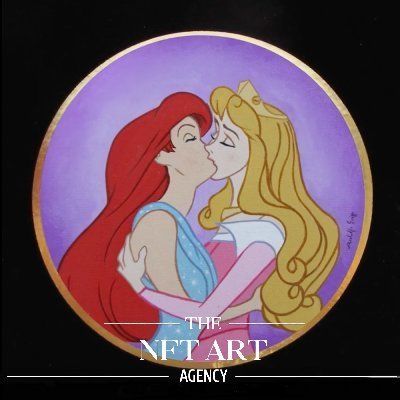 The NFT Art Agency is kicking off the launch of their organization with regularly occurring auctions via foundation.app’s NFT marketplace; the initial auctions will feature pieces from three groundbreaking contemporary artists that are pushing the boundaries of modern artwork, and providing a path for mindfulness, provoking passionate discourse, and combining medium and marketplace for discerning connoisseurs and investors.

The NFT auctions include work from:

Rodolfo is a visual artist born in Mazatlan, Sinaloa Mexico. Among his hundreds of thousands of fans are a cadre of celebrities and top-tier tastemakers who enjoy his edgy and unorthodox juxtapositions of beloved animated icons and the trappings of contemporary tabloid fame. His work has been shared across the internet by leading organizations, celebrities, and media.

INDECLINE – the guerilla art group’s debut NFT drop will include the 3-D digital work “Emperor,” which is a looped motion graphic of the group’s infamous Naked Donald Trump sculptures that garnered national attention ahead of the 2016 election. The NFT Art Agency will represent their most important and infamous public artworks as well as a series of new projects created specifically for the NFT audience.

INDECLINE is an Activist Art Collective founded in 2001. It is comprised of graffiti writers, filmmakers, photographers and full-time rebels and activists. INDECLINE focuses on social, ecological and economical injustices carried out by American and International governments, corporations and law enforcement agencies.

Ken Salter – Ken Salter will debut five NFTs on Foundation’s NFT marketplace from his Emergence of the Third Eye series. The first of which, “Ek” will go live at 5PM EST on Wednesday, September 8th, followed by “Do,” “Teen,” “Chaar,” and “Paanch.” The order utilizes the Hindi numbering system, which (like Roman and Arabic numbers) derive from the original Tamil numerals –referencing the origin of psychedelic imagery and sound. Ken’s NFTs are hypnotic works that aid both meditation and mindfulness and combine almost every aspect of his chosen art practices, which epitomize the scientific principle of emergence.

Ken Salter has been at the frontier of entertainment technology and art for over 25 years. His company manufactures large sculptures using digital techniques, for some of the world’s most recognized artists, including the fabrication of Jeff Koons’ Balloon Rabbit. Ken was diagnosed with Parkinson’s Disease in 2008 at the age of 46, which awakened his artistic abilities, and in 2017 he built “Reflecting Pool,” a device that feeds video images captured on camera back into the screen being photographed, replicating into several windows as a mosaic on the screen.

“With over thirty years experience in the traditional art business, we’ve gathered a roster of some of the most important contemporary artists who have expanded the utility of the virtual space by producing artworks that transcend cultural boundaries,” said Matt Kennedy, CEO of The NFT Art Agency. “We’re beyond proud to represent these artists as they enter into the exciting next generation of digital art via their NFT auctions.”

Additional artists and NFT auctions forthcoming from The NFT Art Agency include works from: THE PANIK COLLECTIVE, an anonymous team of credentialed painters, sculptors, musicians, mathematicians & curators who frequently change their medium to best accommodate themes of sex, gender, politics, and chicanery; and Howard Hallis, who worked for and collaborated with Dr. Timothy Leary from 1992 until his death in 1996, and actually set up the camera which captured Leary’s death via livestream on the internet – one of the all-time most-important performance art pieces. Hallis is one of the foremost experts in the creation of lenticulars in addition to being the father of the Yid Core punk rock movement.

ABOUT The NFT Art Agency

The NFT Art Agency was established in 2021 to promote iconic artists in the burgeoning Non Fungible Token market. We offer a complete representation package that includes animation, minting, publicity and sale, as well as rights management, career coaching, and financial planning.