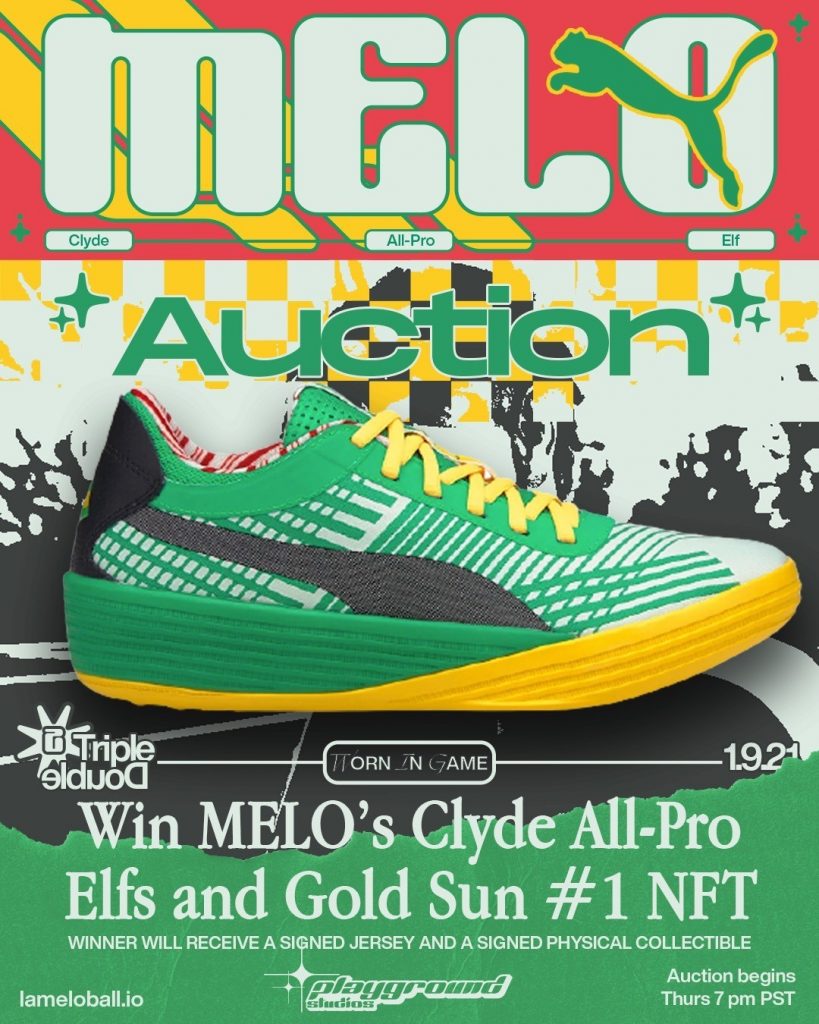 LOS ANGELES, June 17, 2021 — NBA Rookie LaMelo Ball will auction off the pair of autographed Puma Clyde All-Pro Elf shoes worn on January 9th, 2021 — the night Ball became the youngest player in NBA history to record a triple double. The auction is tied to his GOLD SUN #1 NFT, the token that will be permanently recorded on the blockchain as Ball’s most rare and first NFT ever.

The auction begins on Thursday at 7PM PT at lameloball.io, the home of LaMelo Ball Collectibles.

“The shoes mean the world to me, but so do my fans. We’re bringing the physical and digital worlds together, and this is a perfect symbol of that,” Ball explained.

The Gold Sun is the world’s first evolving NFT that connects to a real-life event: the NBA’s announcement of the 2021 Rookie of the Year award, of which Ball was revealed as the winner this week.

LaMelo’s NFTs will track his current statistics and individual awards which change the composition and value of the NFT over time. These Dynamic NFTs, designed in partnership with Chainlink and Ether Cards, are the first to be issued by a professional athlete.

“The idea that NFTs only exist as digital artworks is already falling behind us. We’re now moving toward special access to unique, gamified experiences,” said Sher Chaudhary, co-founder of Playground Studios — the creative producer of Ball’s NFT release.

To date, Ball is one of only three athlete-issued NFT collections to reach at least $1M in sales.

Playground is an NFT studio pioneering the world’s first Dynamic NFTs, or NFTs that update themselves based on real-world events. Playground allows anybody to issue scarce digital tokens that award their fans with utility, exclusive access, and predictive market capabilities based on events off of the blockchain.

About Chainlink and Ether Cards

Chainlink is the industry standard oracle network for powering hybrid smart contracts. Ether Cards is an NFT framework that connects real-world utility and the digital space.