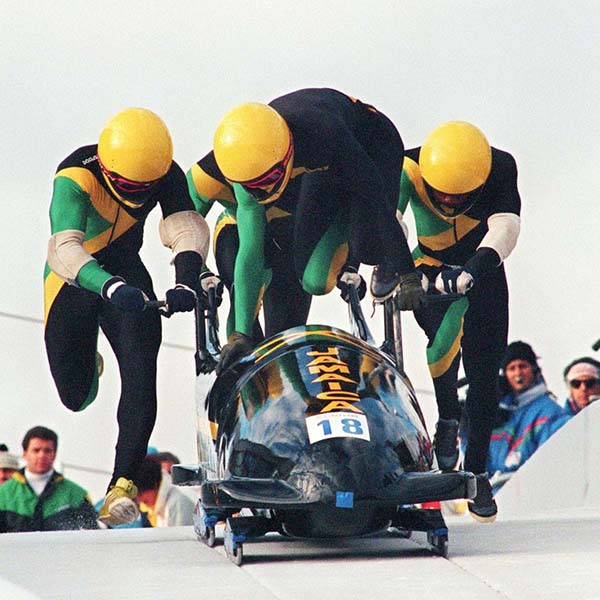 KINGSTON, JAMAICA (PRWEB) AUGUST 24, 2021 – Sports would not be fun without underdogs. The stories and journeys of the overlooked, counted out or disregarded add a compelling layer to the games we love. The Jamaican Bobsled Team experienced this during their debut in the 1988 Winter Olympic Games and now currently face similar resource challenges for the 2022 Winter Olympic Games in Beijing. That is why Chris Stokes, former Jamaican Bobsled team member and author of the book Cool Runnings, which sparked the 1993 hit Disney movie, tech company, Electric Token’s Jacob York and Rohan Midha, sponsorship agent for the Jamaican Bobsled team have formed a strategic partnership to raise money for the Jamaica Bobsled team utilizing NFT’s as a source of equity.

The NFT Drop will feature limited edition digital artwork which highlights the best of the Jamaican Bobsled brand; daring, courageousness, persistence, and claiming your place on Earth regardless of where you are. The NFT Drop initiative is the first of its kind, mixing in a range of authentic Jamaican digital and physical experiences from musicians, music, and art lovers along with a purpose-driven mission of securing the celebrated team a spot in the 2022 Olympics utilizing unique digital assets.

Each collectable will be a Jamaican-themed bobsleigh, wrapped in works of digital 3D art; curated by Florian Tappeser. In addition, the NFT’s will feature designs for each of the six Jamaica bobsleighs that will participate in the 2022 Olympic Winter Games. The digital art will be supported by original work from Jamaican artists, chosen with the input of Electric Token, influential experts in the NFT space, and Jamaica’s Ministry of Culture, Gender, Entertainment and Sports.

The first drop will feature Gabe Weis, one of the most renowned artists in the NFT space with his unique style of cubism being highly sought after by many established collectors.

Funds raised from the sale of the NFT’s will be used to fund Olympic training, purchase world-class equipment, housing, and more.

“Currently, the single greatest challenge is to acquire elite quality racing sleds and runners. It does not matter how talented you are or how hard you work; without competitive equipment you can’t reach your potential,” says Chis Stokes. “Secondly, we want to have funding in place to implement predictable and stable athletic development programs. We are hoping the NFT project will help to solve these issues.”

Rohan Midha says, “In addition, it will help move the NFT space into mainstream for artists, athletes, entrepreneurs and more to claim, own, manage and monitor their own brand value. It’s a shift in power to the creator and away from commercialization; a seismic shift in how value is owned, accumulated and traded.”

“I think there will be a shift towards social equity plays, this is one of the projects that will act as a catalyst so the NFT space will be recognized more widely for the social equity, which will allow more non-profits, NGO, etc. to enter the space from a non-profit angle,” states Jacob York.

Rohan Midha, Sponsorship Agent, Jamaica Bobsleigh Team previously co-founded one of Europe’s leading influencer marketing agencies. The entrepreneur went on to develop several other business interests in the media industry and is currently leading on the NFT project for the Jamaica Bobsleigh and Skeleton Federation Foundation.

Chris Stokes is an original member of the 1988 Jamaica Olympic Bobsleigh Team whose story inspired the world and is now CEO of the Jamaica Bobsleigh and Skeleton Federation. He authored the “Cool Runnings” book and aside from his commitments with the bobsleigh team, spends his time as a motivational speaker, public intellectual, sports administrator and Fintech entrepreneur.

Davone Curray is a thought leader in the NFT space. He is a multidisciplinary creative from Charleston, South Carolina specializing in design, photography, videography, and music. His background in the arts have led him to regularly appear in top NFT publications and podcasts.

Florian Tappeser. animator at Genies is a digital artist and animator on the journey to discover the unconscious ether streams of the metaverse.