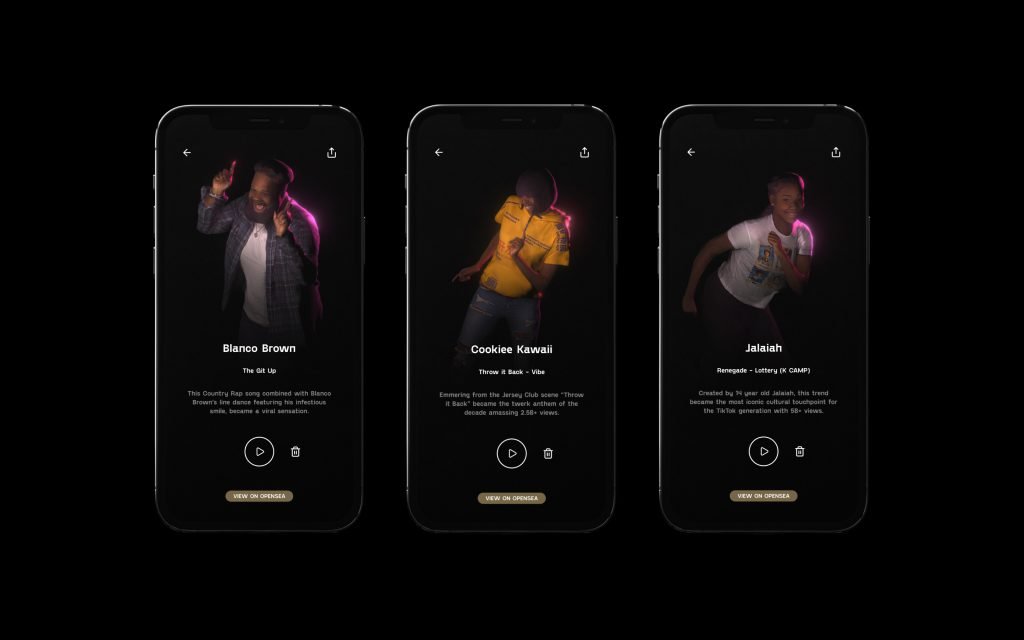 Holograms of Jalaiah Harmon, Cookiee Kawaii & Blanco Brown Captured with 106 Cameras Performing Their Iconic Dances to be Immortalized as NFTs by Jadu

LOS ANGELES (June 16, 2021) — Jadu, a leading mobile AR platform known for creating hyper realistic holographic performances of musicians such as Lil Nas X and Pussy Riot, today announced the release of a collection of hologram NFTs themed around Black artists performing some of this decade’s most impactful dances, each creating a cultural phenomenon.

The collection is composed of three single edition hologram NFTs including Jalaiah Harmon performing her original version of the “Renegade” dance, Cookiee Kawaii performing the “Throw it Back” dance to her song “Vibe (If I Back it Up)” and Blanco Brown performing “The Git Up.” Collectively the three dances have amassed over 10 billion views on TikTok alone and celebrate the kaleidoscopic spectrum of Black art in the US from Atlanta Hip Hop, Jersey Club and Country Rap.

The “Renegade” dance to K Camp’s infectious single “Lottery” took over the internet unlike anything before and became the most iconic cultural touchpoint for the TikTok generation, garnering over 35M “creates” on the platform. It was performed by everyone from Lizzo to Kourtney Kardashian and created a whole new generation of celebrities from Charli D’Amelio to Addison Rae. The original creator of the dance was finally revealed to be 14 year old Jalaiah Harmon by Taylor Lorenz in The New York Times and supported by tweets from Michelle Obama. It sparked a conversation about young black creators not getting due credit for their creations that significantly impact global culture. Jalaiah went on to perform at the 2020 NBA All-Star Game halftime show, at the Ellen Show and was nominated for an MTV Award.

Throw it Back Dance — Cookiee Kawaii (2.5B+ Views on TikTok)

The “Throw it Back” dance to Cookiee Kawaii’s twerk anthem “Vibe” took the internet by storm in early 2020 amassing billions of views. Everyone’s social feeds were filled with friends and celebrities dancing to the start-stop Jersey Club beat before Cookiee even had a TikTok account. Cookiee, a self described super nerd, had been making music in the Jersey Club scene since 2011 with little commercial success. Although her song blew up, not much recognition came to her. “I was going on every page and commenting, like ‘thank you for using my song,’” she told Alyssa Bereznak of The Ringer. “I really worked hard to put my stamp on it.” Since then the song has been played roughly 100M times on Spotify and features Tyga on a remix.

Blanco Brown grew up in Atlanta, Georgia listening to both Hip Hop artists like Outcast and country music such as Johnny Cash. Although he found great success in his career producing for artists like Chris Brown and Pitbull, it wasn’t until he combined his two favorite genres in his single “The Git Up” that he created a viral sensation. Brown filmed himself performing a line dance to the song, featuring his infectious smile, that quickly became a meme on TikTok and has since raked in over 2.5B views on the platform. The dance’s success propelled the song to reach number one on the Hot Country Songs and has 240M+ streams on Spotify alone.

Jadu has diligently worked with and recorded volumetric videos of Jalaiah, Cookiee and Blanco performing their signature dances using 106 cameras immortalizing them as photoreal holograms for NFT collectors to own a piece of cultural history. June signifies Black Music Appreciation Month and Juneteenth commemorates the emancipation of enslaved people in the United States.

“Black culture has always been a driver of popular culture and social discourse, but creatives in the community have not reaped the tremendous economic benefits it brings in,” said Jake Sally, COO at Jadu. “With this endeavor, our goal is to connect both the physical and virtual worlds by leveraging the work and influence of these creators, giving them means to explore their creativity and generate wealth from their contributions to society and culture.”

The holograms in this collection are now also available for free on Jadu’s mobile app. Using augmented reality fans can now bring these artists to their own spaces to share presence with these artists, create their own videos and be a part of cultural history.

You can learn more about this collection on Jadu’s website and collectors can bid on the NFTs on OpenSea on Saturday at 12 pm PT: https://opensea.io/collection/jadu-holograms

Jadu is on a mission to create the premium destination for rich augmented reality experiences on mobile. Viewers can perform alongside three-dimensional AR holograms of their favorite musicians and artists or experience narrative musical AR experiences, bringing festival scale AR to the masses via mobile devices. Jadu works with artists and influencers to create realistic, interactive and immersive performances for fans and listeners and in return allows fans to engage with their favorite artists in unique 3D performances through AR.