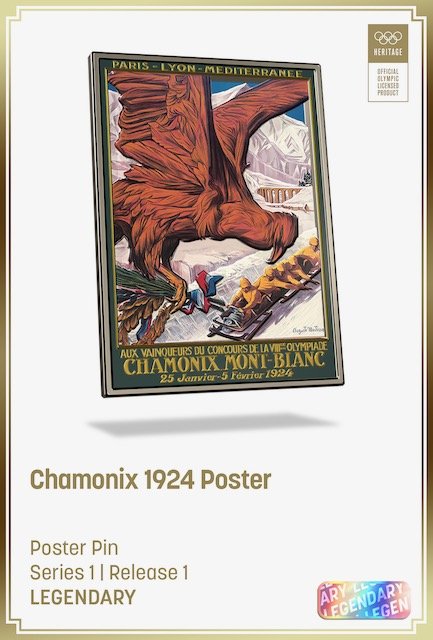 First set available on nWayPlay.com starting on 17 June
Olympic-themed videogame to be launched later in 2021

The NFT Olympic Pins are digital versions of collectible and tradeable Olympic Pins, which will first be distributed and sold on nWayPlay.com starting on 17 June, 2021. Being NFTs, the digital Olympic Pins will have various properties generally associated with physical pins, including authenticity, scarcity, and provenance, making them true collectors’ items.

The NFT Olympic Pins will launch with an inaugural set that forms part of the Olympic Heritage Collection, which celebrates the art and design of the past Olympic Games and reflects the graphic legacy of the world’s largest sporting event, such as posters, emblems, pictograms, and mascots from 125 years of modern Olympic Games.

Collectors can obtain unique and officially licensed NFT Olympic Pins in three ways: 1) by purchasing assorted packs on nWayPlay.com; 2) by purchasing specific pins directly from other collectors on the nWayPlay Marketplace; and 3) by earning them free of charge by playing a real-time Olympic-themed competitive video game connected to nWayPlay and to be launched in the lead up to the Olympic Winter Games Beijing 2022.

“Olympic pins started as a way to identify athletes, judges and officials, but over the past 125 years it has become an Olympic Games tradition, where everyone from athletes to event staff, journalists and spectators all take part to collect and trade pins in the Olympic Village and beyond,” said Timo Lumme, Managing Director of IOC Television and Marketing Services. “Today’s announcement is a natural evolution of this tradition, in line with Olympic Agenda 2020+5 and the IOC’s digital strategy to embrace new digital technologies to promote the Olympic values and grow direct relations with our fans. They can now connect with the excitement of the Games in a whole new way and own a piece of Olympic history.”

“We are honoured to collaborate with the IOC to bring the NFT Olympic Pins Collection to the nWayPlay Marketplace for the first time,” said Taehoon Kim, CEO of nWay. “We used our experience as game developers to incorporate high-quality 3D models with animation and visual effects to create truly premium NFTs.”

Collectors will be able to purchase assorted packs of NFT Olympic Pins on nWayPlay.com starting on 17 June, 2021 with the peer-to-peer transaction functionality on the marketplace to come online shortly later. The new related Olympic-themed videogame will be launched later this year, in the lead up to the Olympic Winter Games Beijing 2022.

nWay, a subsidiary of Animoca Brands, is a San Francisco-based developer, publisher, and tech platform for competitive multiplayer games across mobile, PC, and consoles. The company has a strong track record of developing AAA quality games on mobile and console, such as recently launched WWEⓇ Undefeated, POWER RANGERS: Battle for the Grid, POWER RANGERS: Legacy Wars, and ChronoBlade. nWay is comprised of leading developers and senior executives from Sony, Electronic Arts, WB Games, LucasArts, Kabam, Nexon, and NCSoft. The team has collectively contributed to over a dozen hit mobile, console, and online games, including Marvel Contest of Champions, the Injustice series, Star Wars: The Force Unleashed, Dominations, FIFA, Battlefield Online, Lineage II, and Warhammer. For more information about nWay, visit www.nway.com.

nWayPlay is a platform for competitive multiplayer games with play-to-earn functionality that uses NFTs as prizes. The website nWayPlay.com is a new decentralized marketplace for collectors and gamers to buy, sell, and earn various NFTs with officially licensed IPs. The marketplace will be connected to various games on nWayPlay platform. nWayPlay.com’s inaugural launch is the Olympic Heritage Collection of NFT Olympic Pins. For more information, please visit nWayPlay.com.

About the International Olympic Committee

The International Olympic Committee is a not-for-profit, civil, non-governmental, international organisation made up of volunteers which is committed to building a better world through sport. It redistributes more than 90 per cent of its income to the wider sporting movement, which means that every day the equivalent of USD 3.4 million goes to help athletes and sports organisations at all levels around the world. For more information, please visit www.olympics.com.

About the Olympic Heritage Collection

The Olympic Heritage Collection is one of the IOC’s three Global Licensing core programmes, and it centres on past Olympic Games, lifestyle and high-end products with limited editions aiming to connect the audience with Olympic history through the art and design of previous editions. The target is Olympic enthusiasts and anyone who would like to own a piece of Olympic history.