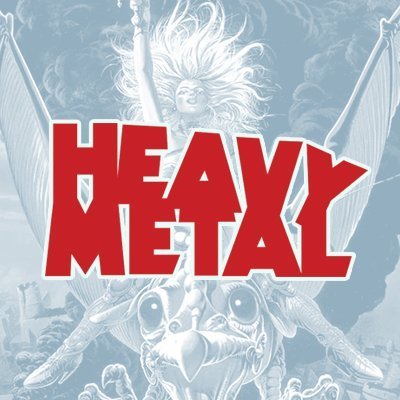 NEW YORK, Sept. 2, 2021 — Crypto.com NFT — a carefully curated platform for collecting and trading non-fungible tokens (NFTs) from the worlds of art, design, entertainment, fashion and sports — today announced its foray into the comic book space with illustrated fantasy, science fiction and horror publisher Heavy Metal, home of the legendary Heavy Metal Magazine. The partnership will launch a Heavy Metal Magazine store on Crypto.com/NFT, where fans and collectors will be able to explore and trade in a wide variety of exclusive content. The iconic publication’s debut collection on the NFT marketplace is scheduled for release on September 15, 2021 at 9 a.m. PT.

“When I took over Heavy Metal, it was with the singular goal of bringing the proverbial ‘Ranger from the North back to his rightful throne at Minas Tirith’; collaborating with Crypto.com on a slate of digital collectables is like taking a giant step closer to Gondor,” said Heavy Metal CEO Matthew Medney. “With the first collection inspired by my very own hard sci-fi book ‘Beyond Kuiper: The Galactic Star Alliance,’ which I co-wrote with John Connelly, we use the concept of discovering new worlds to literally offer owners of the NFTs entry to Heavy Metal’s worlds — which is epically awesome. Then we get to top that with NFTs from the ‘zombie lord’ himself, George C. Romero — and if that isn’t enough, Joe-freaking-Trohman of Fall Out Boy is realizing his story ‘The Axe’ as digital collectibles. The next four months with Crypto.com/NFT are going to be insane — or as my partner, Heavy Metal President and Head of Studio Tommy Coriale, so eloquently puts it: ‘Buckle the f— up.'”

Based on the Amazon No. 1 best-selling hard science fiction novel “Beyond Kuiper: The Galactic Star Alliance,” created by Medney with Lockheed Martin Space mechanical engineer John Connelly, the inaugural drop will include a piece by renowned U.K. street artist Thumbs — among others that illustrate the co-creators’ scientifically-grounded fantastical universe.

Following the “Beyond Kuiper” collection, Heavy Metal will release a drop based on George C. Romero’s “The Rise” — the comic book series prologue to his father George A. Romero’s 1968 classic zombie movie “Night of the Living Dead.”

A third collection will be based on “The Axe,” a project which was recently announced by Joe Trohman — guitarist of the multi-platinum rock band Fall Out Boy and The Damned Things — who also hosts the Heavy Metal podcast “I Hate Myself.” “The Axe” was co-created by Trohman and famous comedian, actor, musician and writer Brian Posehn. Best known for his work in comedy, television and film, Posehn has also co-written many issues of Marvel’s “Deadpool.” The project is illustrated by accomplished comic book artist Scott Koblish, who has worked on hundreds of comic books for the likes of Marvel, Disney and DC — including a six-year run on “Deadpool.”

“I find the whole NFT thing fascinating,” said Trohman. “To boot, I am excited to take something from ‘The Axe’ — this disgusting, sentient, hell-guitar — and let it exist in other mediums. Anything we can do to expand the world of ‘The Axe’ is exciting to me. I think it’s so cool to see this weird Sam Raimi-inspired guitar that’s supposed to be alive, come to life!

“I had this idea for ‘The Axe’ for so long and couldn’t find the right partner for it, because it’s pretty insane. Luckily, Heavy Metal deals in insane. I’m so grateful they took a swing on this one, because I can’t wait to share it with everyone.”

First published in 1977, when comic book content was still heavily regulated by the controversial Comics Code Authority, Heavy Metal Magazine has been telling subversive science fiction, fantasy and horror stories and championing counterculture for over 40 years. The first magazine of its kind to introduce celebrated global comic creators such as Moebius, Enki Bilal and Pepe Moreno to an American audience, Heavy Metal has provided a platform for many legendary writers and illustrators including Richard Corben, Jim Steranko and Bernie Wrightson. The brand’s impact on popular culture is substantial; besides spawning the cult classic 1981 namesake anthology film “Heavy Metal,” it is also credited with providing the groundwork for iconic motion pictures including “Blade Runner” and “The Fifth Element.” Currently published monthly, the magazine continues to feature stories, artist galleries and interviews by groundbreaking new and established talent — and the brand is also home to a slate of standalone comic book series, prose novels, a podcast network as well as television and film projects.

“To me, Heavy Metal isn’t just a countercultural institution that has always sought to upset the status quo and pave its own way creatively, it has also consistently pushed the boundaries of convention in the comic book community and effectively influenced the mainstream culture,” said Crypto.com Executive Vice President and Global Head of NFT Joe Conyers III. “In that way, Heavy Metal shares many common values with the cryptocurrency and NFT communities — making this partnership a perfect fit. We’re excited that Matt and Tommy chose us as their NFT platform, and to have creators like Joe Trohman, Brian Posehn, Scott Koblish and George Romero involved is icing on the cake.”

“Matt and I are beyond pumped to launch these ‘Beyond Kuiper,’ ‘The Rise,’ and ‘The Axe’ offerings on the NFT marketplace of the world’s fastest growing crypto app, especially since we are active users of it already,” added Coriale. “Plus a badass brand like Heavy Metal belongs center stage next to other killer brands like the UFC, and we are so very stoked that Crypto.com has opened its doors to be that epic venue for us all.”

“NFTs are one of the most exciting new spaces for me,” said Romero. “To launch ‘The Rise’ NFT with Heavy Metal on Crypto.com is one of those next-gen moments for a brand that has endured for five decades. I love the excitement that bleeds from a Romero and Heavy Metal collaboration. Creating this with Matthew Medney has been one of the most rad-tastic projects I’ve had the honor of realizing. I’m so excited to see the future hitting both of our legacy brands with such force.”

Crypto.com NFT is a carefully curated platform for collecting and trading non-fungible tokens by creators, celebrities and brands from the worlds of art, design, entertainment, sports and fashion — including the Aston Martin Formula One Team, Beatport, BossLogic, Boy George, Diego Perrone, Lega Serie A, Lionel Richie, Mr. Brainwash and Snoop Dogg, among many other high-profile artists and clients. Established in March 2021, Crypto.com NFT is powered by Crypto.com — which serves over 10 million customers with the world’s fastest growing crypto app, the Crypto.com Visa Card, the Crypto.com Exchange and the Crypto.com DeFi Wallet. More information is available at Crypto.com/NFT.

First published in 1977, Heavy Metal Magazine, the world’s foremost illustrated fantasy magazine, explores fantastic and surrealistic worlds, alternate realities, science fiction and thrillers in the past, present and future. Writers and illustrators from around the world take you to places you never dreamed existed. Heavy Metal Magazine was the first magazine to bring European legends like Moebius, Enki Bilal and Pepe Moreno to the U.S. while showcasing American superstars like Richard Corben, Jim Steranko and Bernie Wrightson. The magazine continues to showcase amazing new talent and established creators. Now published monthly, Heavy Metal Magazine features serialized and standalone stories, artist galleries and interviews. Heavy Metal Entertainment is home not only to its iconic magazine, but also an incredible slate of comics and prose novels, a podcast network, and television and film projects. With CEO Matthew Medney now at the helm, Heavy Metal promises to boldly go where no one has gone before. Explore ancient secrets, forgotten worlds and savage futures… Experience Heavy Metal. Join us at www.heavymetal.com.