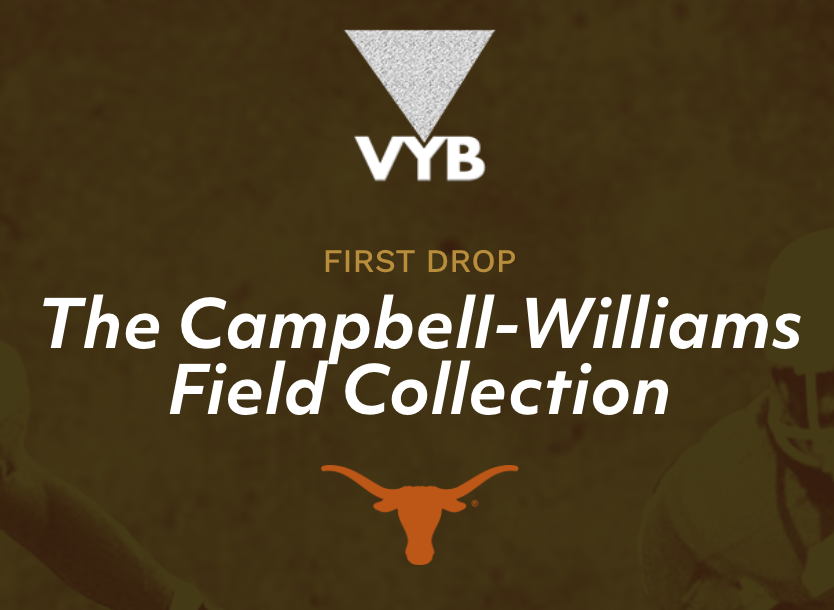 AUSTIN, Texas, Aug. 31, 2021 — Earl Campbell and Ricky Williams, two of football’s most decorated athletes and distinguished Texas Longhorns alumni, have today announced the launch of ‘The Campbell-Williams Field NFT Collection‘ in collaboration with The University of Texas at Austin. The series of non-fungible tokens (NFTs) will commemorate the University’s decision to rename its historic football field after Campbell and Williams, both members of the College Football Hall of Fame.

Campbell and Williams are partnering with decentralized technology firm Esprezzo and digital art studio VybHouse to mint and release the limited-edition series of NFTs. The collection features art from an eclectic group of diverse minority artists, including Christian Paniagua out of Queens, NY and Bryson Williams, a local Austin TX artist. Each variation will include original digital artwork and verified proof of ownership on the Ethereum blockchain, with some also including access to high-profile live events and memorabilia.

The auction for ‘The Campbell-Williams Field Collection’ is scheduled to begin Wednesday, September 8 at 8pm CST and conclude Sunday, September 12 at 8pm CST. Twenty-five percent of proceeds raised from ‘The Campbell-Williams Field NFT Collection’ will be donated to The University of Texas at Austin’s Division of Diversity and Community Engagement, a group that advocates for inclusive campus culture, positive community engagement, education opportunities for underrepresented groups and academic support for aspiring graduate school students in the region.

Speaking about the launch, Earl Campbell – an All-American and the University of Texas at Austin’s first recipient of the Heisman Memorial Trophy – said: “Having an opportunity along with VybHouse to commemorate this special occasion is a big deal for Ricky and I. Our legacy is a strong one and having the field re-named after us only cements that. We are both grateful to the Joe Jamail family.”

“Above all things I have become interested in the NFT run that is currently taking place,” Campbell continued. “This is a unique way for us both to enter the game and engage the market. Being able to gift proceeds back to the University’s Division of Diversity and Community Engagement is something that needs to be done. We would not want it any other way.”

Ricky Williams – also an All-American and Heisman Trophy winner – added: “Life is short and only what we leave behind survives. My name on the University of Texas Football field, and the opportunity to support the University’s Division of Diversity and Community Engagement, gives real meaning to everything I was able to accomplish during my time on The Forty Acres.”

The commemorative Campbell-Williams Field Collection includes four designs, each with their own name and a host of benefits:

The collaboration between Campbell, Williams and the University is a compelling use case for NFTs that celebrates their shared legacy, while reaffirming the city of Austin’s leading role in the evolution of technology, sport, and social equality.

“Times are changing and these tokens embody so much of that change, bringing creativity, technology, athletics, and social justice together in one place,” said Lance Steagall, Partner and Creative Director of VybHouse. “September 8 will make history in the heart of football country and this technology gives fans a chance to not only be involved but also own a piece of it.”

“We are thrilled to partner with VybHouse for their first NFT drop with Ricky Williams and Earl Campbell,” said Remy Carpinito, CEO of Esprezzo. “This partnership is about bringing fans and collectors novel experiences and unprecedented access to legends. We are excited for the road ahead.”

The auction and NFTs will be hosted on OpenSea, the largest marketplace for digital asset collectibles. Bidders must have a MetaMask wallet and bids are made using Ether (ETH), the native currency of the Ethereum blockchain on which OpenSea resides.

Earl Christian Campbell, known as the “Tyler Rose,” is an American football legend and one of the most revered running backs of his time. Campbell played college football for The University of Texas, where he won the Heisman Memorial Trophy as the most outstanding college player in 1977, earned unanimous All-American honors, and was the first recipient of the Davey O’Brien Memorial Trophy as the most outstanding player in the Southwest Conference. Campbell finished his college career with 4,443 rushing yards and 40 rushing touchdowns in 40 games over four seasons.

Campbell entered the National Football League (NFL) in 1978 after being drafted first overall by the Houston Oilers (now the Tennessee Titans). He was named NFL Offensive Rookie of the Year, Offensive Player of the Year, and NFL Most Valuable Player in his first three seasons, rushing for 5,081 yards and scoring 45 touchdowns.

Outside of football, Campbell has also founded Earl Campbell Meat Products, which manufactures and sells quality food products. He currently serves as special assistant to the Athletic Director for University of Texas Athletics and is a Co-Founder of the Project Rose Research Institute for Sports Science.

Errick Lynne “Ricky” Williams Jr. is an American former football running back who played 12 seasons in the National Football League (NFL) and one season in the Canadian Football League (CFL). Williams played college football for the University of Texas, where he was a two-time All-American, won the Heisman Memorial Trophy as the most outstanding college player in 1998, won the Doak Walker Award as America’s top collegiate running back, and broke the NCAA’s career rushing record, which had stood for 22 years.

Williams was drafted by the New Orleans Saints fifth overall in the 1999 NFL Draft. As a professional, he also played for the Miami Dolphins, Toronto Argonauts, and Baltimore Ravens. Williams was also drafted in the eighth round of the 1995 MLB June amateur draft, playing as an outfielder for the Philadelphia Phillies before opting for a full-time NFL career.

Williams is a member of the College Football Hall of Fame (2015). His jersey number has been retired by The University of Texas (#34). Williams is also the subject of documentary films created by ESPN and NFL Network.

Williams is a former assistant football coach at the University of the Incarnate Word. He is currently launching both his cannabis brand, Highsman, and his astrology-based dating app LILAH.