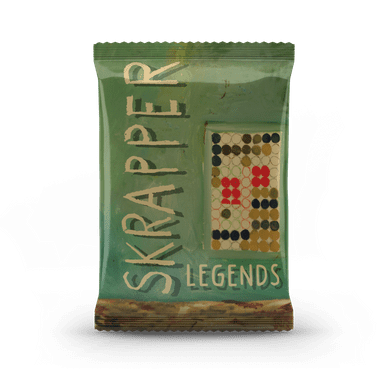 On June 22, 2021, world-renowned artist William Quigley and his partner Seth Lamburn, aka SkrapperPunk, join with the Worldwide Asset eXchange (WAX) to bring the legendary baseball phenom Babe Ruth back to life in the emotion-evoking NFT collection “Skrapper Legends.”

The limited collection features 714 NFT packs that interpret the famed 1948 Pulitzer Prize-winning photo “The Babe Bows Out” through the lens of contemporary art. The official NFT artwork was rendered from a detail of a larger painting entitled “Baseball”, commissioned in 1998 by LA-based sports memorabilia dealer Dave Levin of GFG. The duo struck a deal that saw Quigley remaster the work for $18,000 in trading cards. The result was an 8 x 8 ft. painting now considered a contemporary masterpiece.

Quigley (not to be confused with WAX’s CEO and co-founder, William E. Quigley), born in Philadelphia in 1961, is famed for his unique ability to bring historic figures to life. Having sold out his first show in 1985 (right out of college) alongside the legendary icon Andy Warhol, Quigley has displayed his work in some of the most famous and prestigious art galleries in the world — including the Philadelphia Museum of Art, Art Basel, the Miro Foundation, MOCA LA, Manny Silverman Gallery, Karl Hutter Fine Art, Keyes Gallery, AB NY Gallery, and Art Chicago.

His works have been appraised for millions of dollars and are owned by superstar athletes, celebrities, and politicians. Some collectors have been supporting Quigley’s art for years – like oncologist Dr. Ken and son Karl Tokita, retired CEO of Cantor Fitzgerald Phil Marber, Henry S. McNeil, Giel and Diane Milner (owning over 35 works), Pete Francis, of the band Dispatch, Shaquille O’Neal, Yandex founder John and Johanna Boynton, philanthropist Gregory Brown, and owner of Electric Lady Studios Keith Stoltz (over 15 works). In 2015, entrepreneur Alexander Zweig purchased 13 works off Instagram in a single day through the introduction of collectors Senter Johnson and Brian Sullivan, who are now producing a documentary on the artist’s illustrious career.

In 2013, Quigley’s unique take on his 2006 portrait of Donald Trump sold for $70,000 to President Trump and is now valued at more than $1.3 million. Another contemporary masterpiece, based on a 1973 Avengers Marvel comic book cover, was created for actor Robert Downy Jr. and was commissioned for $50,000 by fellow star Chris Evans (recently valued at just shy of $1 million). Currently, Quigley is painting a $100,000 commission of Jimi Hendrix for Electric Lady Studio in NYC.

In the Skrapper Legends NFT series, collectors will have the opportunity to receive one (1) of three (3) bold, animated renditions of the original, heart-warming photo. The cards are designed with Quigley’s contemporary flair, while staying true to the integrity of the original art.

Each pack contains a single (1) NFT collectible and retails for $100. All NFTs on the WAX platform are pre-minted, allowing collectors to open packs at their own pace.

All collectors are guaranteed equal odds of receiving a low mint, regardless of time opened. Once opened, NFTs can be kept safe in the WAX Cloud Wallet, traded with friends, or resold on the secondary marketplace.

“WAX is proud to partner with William Quigley to further celebrate and solidify Babe Ruth’s legacy,” said William E. Quigley, Co-Founder of WAX. “By immortalizing this unforgettable moment in sports history, it brings together three powerhouses that are so relevant to today — crypto, art, and sports for an unforgettable NFT experience.”

The sale will officially go live on June 22 at 1 pm EST, and pack openings follow shortly thereafter at 4 pm EST.

Go to the following link to buy and for more information: https://on.wax.io/skrapper/

Get the full story here.

The Worldwide Asset eXchange™ (WAX), aka the King of NFTs, is the world’s #1 blockchain as measured by both the number of users and by the number of transactions, according to Dappradar.com. WAX is also the leading entertainment NFT network. In 2018, the company introduced vIRLs®, giving consumer product companies the ability to directly link NFTs to physical consumer products. Co-founded in 2017 by William E. Quigley and Jonathan Yantis, WAX delivers the safest and most convenient way to create, buy, sell and trade virtual items and physical products (NFTs and vIRLs®) to anyone, anywhere in the world. WAX has facilitated the trade of more than 100 million digital collectibles including Major League Baseball (via Topps MLB collectibles), Capcom’s “Street Fighter,” and world-renowned entertainers Deadmau5 and Weezer. For more information, please visit https://wax.io and follow along on Twitter and Discord.

William Quigley is an American Artist (born April 29, 1961, in Pennsylvania) working in New York. He studied art, history and film undergrad at Philadelphia College of Art, Tyler School of Art in Rome, University of Pennsylvania and Graduate school at Columbia University MFA. Immediately after graduating from Philadelphia College of Art, now University of the Arts, he had his first exhibition with Andy Warhol in 1985 at Henry S. McNeil Gallery. McNeil is one of the leading collectors of Contemporary Art in the United States. Since Quigley has exhibited his work across Europe, India and South America showing in Art Fairs, Galleries, and Museums internationally.

Today, his work is collected all over the world, and through his creative marketing and brand Skrapper, has built a reputation as one of the most influential artists among a younger generation of self made artists. He has proudly made some very timely, now historic iconic commissioned paintings of, and in many cases for, Presidents Clinton, Bush and Trump; Robert Downey Jr., Arnold Schwarzenegger, Michael Jordan, Shaquille Oneal, Wayne Gretzky, Eminem, Muhammed Ali, Bruce Springsteen, Ice Cube, Kobe Bryant, and Magic Johnson. Because of his collector base and dedication to children, soldiers, and extensive education and health related charities, in 2006 his work was featured on ABC TV series “Lifestyles of the Rich and Famous”, and in 2007 was selected as VH1 featured Artist of the Year along with honorees, President William and Senator Hillary Clinton, John Mayer, Jon Bon Jovi, Roger Waters, MTV / VH1 founder John Sykes, and Mariah Carey.

In 2018, actor Chris Evans commissioned Quigley to create a surprise Avengers painting for his co-star and friend, Robert Downey Jr., who showcased the artwork at a 2019 premiere of Avengers: Endgame. Quigley emphasized that this recent work is dedicated to raising awareness for Captain Braveheart Aaron Hunter and ROHHAD disease. In 2019, his 2006 Donald Trump portrait, that his mother told him to paint, became the most controversial and talked about painting in the world. One continuous passion that is very close to his heart is anything that supports soldiers and vets.

Seth Lamburn was born on January 27, 1973, in Marlborough, Massachusetts. He attended Clark University and Wentworth institute of Technology, studying graphic and computer design. His understanding of demographics, market placement, and ability to adapt, embrace, and interpret raw images and then convert them into viable/salable designs is unmatched. As the art director at Beantown Brand Apparel, Seth develops unique apparel programs for resort destination retailers, surf shops, and pro sports teams.

By seeing a project through from start to finish (while expanding and growing Beantown, ChillyBears, Teddy the Dog, and other apparel businesses), Lamburn has established himself as one of the most sought out creative branding executives in New England. In 2020 Lamburn, aka SkrapperPunk, partnered with Skrapper CEO Josh Garay, lawyer Jonathan Robbin, and artist William Quigley to create Skrapper Designs LLC. Their collaboration with WAX.io is their first NFT Skrapper project.