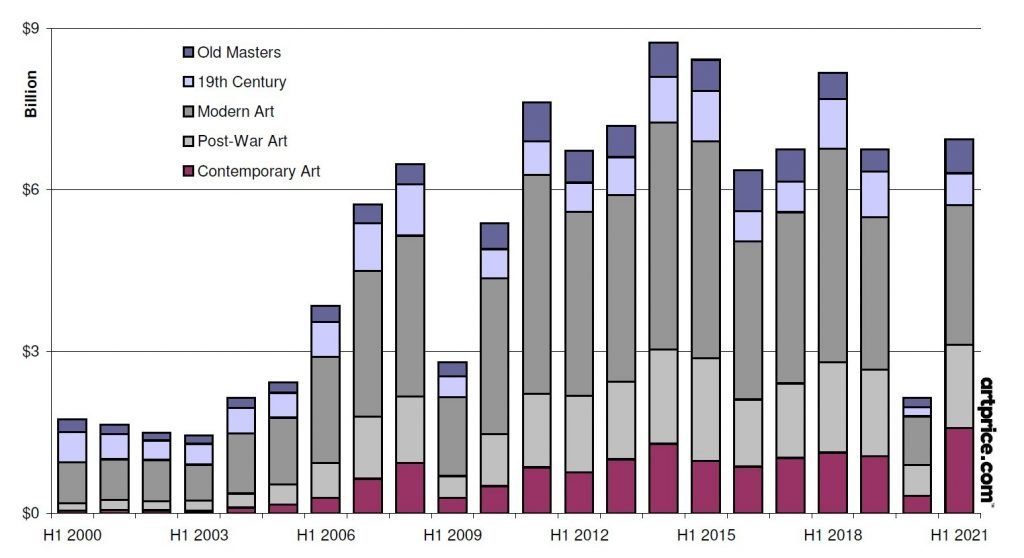 Artmarket.com: Artprice analyses the art market’s dazzling recovery from the health crisis in H1 2021, fortified by its digital transformation

PARIS, Aug. 4, 2021 /CNW/ — In the first semester of 2021 the art auction market managed to recover all of its dynamism. If all goes well, the art fairs will resume in September. They will, however, have to contend with a substantially modified market characterised by the sensational arrival of NFTs and sky-high prices for works by very young and popular artists, both phenomena which suggest a strong urge to shake up the established order. While collectors seem to be in a hurry to invest in what might be called the “Art Market 2.0”, even if it means by-passing galleries, lots of artists also want to take advantage of the art market’s digital transformation, and the auction houses appear keen to join in the ‘disruptive’ process.

According to thierry Ehrmann, President and Founder of Artmarket.com and its Artprice department “Two Art Markets are currently coexisting: one organic, the other disruptive. The first is traditional and takes into account the History of Art, with its codes, its museums, its galleries, its fairs, its biennials, etc. The second reflects a world undergoing a profound reorganization, challenging ‘official history’ through movements like #metoo and #blacklivesmatter and clearly oriented towards the numerous political, climatic, health and technological challenges ahead”.

This analysis provides an overview of the transformations undertaken in H1 2021. The distinction between a “new” and an “old” art market is purely theoretical, but it allows us to apprehend the mechanisms now underlying a whole tranche of the market’s transactions. It also allows us to understand how Beeple’s The first 500 days (2021) could be purchased for $69 million against a starting price of just $100… an artist who wasn’t on the radar of any of the market’s key players: no gallery, no exhibitions and no auction results… but who had several million followers on Instagram and the support of Christie’s, one of the oldest and most respectable auction houses on the planet.

Affordable works at the core of the newly-configured market

Fine art auctions generated $6.9 billion in H1 2021, up 3% versus H1 2019. This performance is extremely reassuring in view of the health crisis, which is still paralyzing whole segments of the cultural scene and is still the source of substantial near-term uncertainty. The auction operators nevertheless managed to generate a turnover equivalent to the average for the ten years before the health crisis (H1 2010 – H1 2019), i.e. since China’s rise on the international art market.

This latest recovery is all the more robust for being based on a record number of transactions: 288,500 artworks were sold in six months, up 5% versus H1 2019. The increase is particularly visible in the affordable segments covering price ranges between $1,000 and $20,000 where the number of lots sold rose 13%. The high-end market slowed somewhat in the first six months of the year: lots sold between $1 and 50 million contracted 1.4%, from 855 lots (in H1 2019) to 843 lots.

The intensity of demand has been confirmed by a significantly lower-than-usual unsold rate. This indicator, which reflects the balance between supply and demand, has fluctuated between 32% and 36% for the past decade. For the first six months of 2021 it was down to 28% and should therefore be watched carefully over the coming months.

Beeple accounted for 1% of the art market

Online sales are now an integral part of auction house strategies. At the start of the year, the Anglo-Saxon giants Christie’s, Sotheby’s and Phillips dematerialized a little more than half of their operations: out of 258 fine art sessions, 133 were conducted exclusively online. These transactions still only generated a tenth (9.3%) of the operators’ turnover as they mainly use this sales channel for entry-level and mid-range lots.

But the automated online platforms set up by the sales companies are, by nature, perfectly suited to NFTs, which have substantial potential in the high-end market. In fact, NFTs already represent a third of the value of online sales, or 2% of the global secondary art market in H1 2021. With his very first sale at Christie’s generating $69 million, Beeple alone accounted for exactly 1% of it!

This new market is at the heart of the disruptive phenomena identified by Artprice and it is indicative of the drive towards innovation within the auction industry. A month after the sale of Beeple’s work at Christie’s, Sotheby’s organised a sale of NFTs (Non-Fungible Tokens) titled The Fungible Collection by Pak. Ten days later, Phillips offered the first second-generation NFT, a work called Replicator by Mad Dog Jones, which is designed to randomly generate replicas of itself.

The Contemporary art segment (artists born after 1945) posted a historic performance in H1 2021, up 50% versus H1 2019. The Modern art (-8%) and Post-War (-4%) segments have not yet returned to the levels of intensity that prevailed before the health crisis.

This situation has enhanced the visibility of Contemporary Art, which now accounts for 23% of global fine art auction turnover compared with just 3% twenty years ago. Having generated over $300 million (double Andy Warhol’s total), Jean-Michel Basquiat alone accounted for 4.3% of the global art auction market in H1 2021.

At 47, the anonymous street artist Banksy is one of the five most successful signatures on the global art auction market, all creative periods combined! He is even the most lucrative living artist on the planet, and, without the support of either Larry Gagosian or David Zwirner! Universally adored for his poetic and cynical incursions into public spaces, Banksy is revolutionizing the art market with his Pest Control system that allows him to authenticate and control the circulation of hundreds of thousands of unique or limited editions works.

On 23 March 2021, his canvas Game Changer (2020) buried Christie’s estimate at a charity sale and set a new auction record at $23.2 million. The enthusiasm surrounding this work reveals the preferences of an art market in search of shocking works, in tune with current events. The work depicts a young boy abandoning his Batman and his Superman to play with a ‘super-nurse’ doll.

Halted in its growth in 2020, the Hong Kong art market has posted two consecutive semesters stronger than ever. The city is now posting the world’s highest average price for artworks sold at auction: with a total of $962 million hammered from only 3,200 fine art lots sold in H1, the average price is around $300,000. This statistic sets Hong Kong apart from the other major art market capitals since the average price is just $32,000 in London and $41,000 in New York.

Hong Kong also managed to attract three remarkable paintings by Jean-Michel Basquiat which each fetched over $35 million. Both Christie’s and Sotheby’s now seem convinced that these masterpieces of American Contemporary Art (which New York’s MoMA regrets not having acquired when they were much more affordable) will sell for better prices in Asia than in London.

In the medium term, Hong Kong could even become the second largest market in the world ahead of the UK, which totaled $1.2 billion in H1 2021 (only 21% more than Hong Kong’s $962 million). Ten years ago, the UK’s secondary art market was nearly five times larger than its former colony (+380%). However, the UK retains a much more diversified art market: in H1 2021, it sold 36,000 works, ten times more than Hong Kong.

Today, the former British colony is essentially playing an accelerator role for the ultra-contemporary art market with Hong Kong buyers showing a greater willingness to bid substantially above estimates, forcing London and New York auctioneers to align their prices with Hong Kong’s results, or risk seeing the works of future art market superstars all sold through Asia.

Since his death less than two years ago, 62 works by Matthew Wong (1984-2019) have been auctioned in New York, London and Hong Kong.

The ‘international rachet mechanism’ that has affected the prices of this artist’s creations can be seen at work in the prices of other superstars of his generation, born after 1980. The ascensions of artists like Salman Toor, Avery Singer and Amoako Boafo have been incredibly swift. Within a matter of months their works have become simply unavoidable on the international art market. Highly gifted and appearing to be highly emblematic of our era, their works have have been subject to fiercely competitive demand from American, European and Asian collectors at the same time.

As we can see above, the sales of works by Japanese artist Ayako Rokkaku (b. 1982) have not followed this schema. Her colorful acrylics on canvas are circulating with substantial intensity in Southeast Asia where 44 of his paintings were auctioned in H1 2021 for an average price of $170,000. Her best works, initially put into circulation by the Amsterdam-based Delaive gallery, almost always end up at auction in Asia.

In New York, Pablo Picasso’s Woman Seated by the Window (1932) crossed the $100 million threshold for the first time in 24 months. This result confirms the renewed confidence of both buyers and sellers. The exponential rise in the value of Picasso’s works over the last quarter-century has crystallized, despite the sequence of financial and health crises. The value of this painting evolved from $7.5 million in 1997 to $45 million in 2013, finally reaching $103.4 million this year.

The year 2021 also started very well on New York’s high-end market with the eagerly awaited sale (at the end of January) of a portrait attributed to Sandro Botticelli. Fetching just over $92 million, this was the second best auction result ever recorded for an Old Master behind Leonardo da Vinci’s Salvatore Mundi. However, more than three and a half years after its sale, the $450 million payed in November 2017 for the portrait of Christ holding a crystal orb has become subject to a growing number of questions.

The first six months of 2021 also saw the sale of several Impressionist masterpieces (by Monet, Van Gogh and Cézanne,) as well as a number of masterpieces of American Abstraction and Lyrical Abstraction (by Twombly, Rothko and Chu Teh-Chun, among others). There were also some very famous portraits (Warhol’s Double Elvis and Lucien Freud’s David Hockney). But the period will remain above all marked by the first sales of NFTs and the extraordinary price records for very young artists that Artprice will analyze in detail in its upcoming Contemporary Art Market Report, to be published on the occasion of the Frieze and FIAC art fairs in October.

Discover Artmarket and its Artprice department on video: www.artprice.com/video