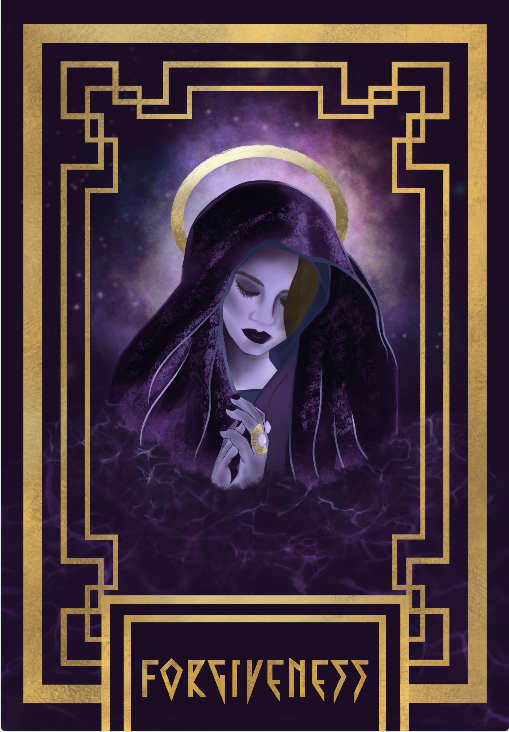 June 10, 2021–After the great success and feedback from her first NFT release earlier this month, international Songstress Ameera announces the release of her limited-edition oracle deck, designed by herself. The deck will consist of 77 different designs to collect, and each card will become valuable due to its rarity. The first card will be released 10th June, with new cards being released sporadically over the next year.

You can purchase the first card in the deck, Forgiveness, HERE

The New World Oracle is a digital Oracle deck, consisting of 77 cards. The releases will count down from 77 to 1. Each card will hold a supply relative to its number, for example card 77 has 77 available, counting down to card 1 which will have just 1 available. However, the only way to collect the final card is to purchase Forgiveness. Every purchaser of Forgiveness will be automatically entered into a raffle, with the winner being announced when the final card is released.

The collectible cards are titled with a specific life lesson. Each card comes with a private written explanation regarding the life lesson for the owner. The cards represent the opportunity of a New World by abiding the titled lessons.

Ameera chose to only animate the waves to symbolise the stillness in forgiveness. The glow lights in the background to give it 3D feel, like looking into an oracle card window, the perfect first card in this deck. The music behind the card is based on the vocal call for forgiveness. A primitive cry out to whomever it is you believe in, God, higher self, Angels, Deities, ascended masters, ancestors; whoever can offer the strength.

Art was always something Ameera did as a child, it was a way to escape and a form of therapy. She’d sketch and paint nature and animals and later in her teenage years she was commissioned in Dubai to paint abstract art for social circles. Ameera’s spirituality came about at around 13 years old.

“As a teenager, I was sent to a naturopath for depression and without me saying anything the therapist knew everything that was going on for me at home. She read my aura and taught me how to see them too, I was told I was an indigo child and was gifted my first crystal.”

From that day on Ameera became obsessed with crystals and reading anything to do with new age concepts; this all became reflected in her own art more and more as the years went on.

“When we were getting everything ready for the release of New World, I was using an App called Procreate for content I used for design. I was feeling a little lost having finished my album and I decided to do some drawing on the App – purely for fun. I picked everything up quickly after watching some YouTube videos and I quickly realised after a few pieces, that I was creating Oracle cards.”

When Ameera writes songs, she feels the title and theme will usually come to her as she’s creating. She felt the same designing each piece of art and took the inspiration she uses for music and applied it to each card, plus added in an additional love.

Ameera found her style with backgrounds reminiscent of Galaxies and spiritual symbolism encapsulating her ideologies, upbringing, and beliefs.

“I think my favourite thing about the deck; is that each card symbolises a lesson, just like my songs. This first card is about forgiveness, which has been one of the hardest things I’ve had to learn. It’s easy to forgive the small things in life but sometimes there’s events that occur, where forgiveness can seem impossible. I’ve learned that forgiveness isn’t about being best friends with a person who’s harmed you – it’s about letting the burden go, allowing yourself to be free.”

Music has and will always be Ameera’s first passion and skill and naturally; being a creative, she’s always had a love for art. Ameera admires many great artists and whilst not considering herself technically skilled to a level they dedicate their lives to; she does enjoy it and is excited to release this other medium into the digital aether.

About Ameera:
Ameera is a ‘New World’ producer and recording artist releasing her debut album ‘New World’ on 12th February 2021. The genre New World came about to encapsulate the uniqueness of Ameera’s music, which can be described as Electronic, Chill, World, Tribal, New Age, Cinematic, Experimental, Orchestral and commercial.

After establishing a career writing for major labels, leading producers, artists and management representatives across London, Dubai, Los Angeles and Australia. Ameera realised, she had never expressed her own sound.

After a proud independent history; winning Top award of #1, at The Australian Independent Music Awards; charting Top 10 across ARIA charts, iTunes charts and radio download charts. After touring and performing across Europe with MTV’s Summer Dance Festival; earning her stripes as a DJ and being featured on TV shows such as Channel Ten’s, Bondi Ink and Music Channels CMC and Channel V.

The time has come for Ameera to reveal her best work, yet. Her own work.